If you’re wondering; does a violin have frets? You’re in the right place.

The short answer is no; violins do not have frets.

The longer answer is that way back when early forms of the violin were created and played, they were called viols. (These early violins were heavily used in the baroque period.)

Viols, an early form of violin had frets that were made of gut. Unfortunately, these frets were prone to stretching and loosening in warm humid weather which would cause them to shrink or break. (In simple terms they were a pain to keep aligned and in tune.)

It was later discovered that playing without frets, on a violin, cello or other string instrument gave the musician a greater ability to play more expressively, without being restricted to a set number of frets. (It was also much easier on the fingers to play without frets!)

From the 18th century and onwards, it was rare to find a violin with frets. The styles of music that were written and the way violins were played expressively, meant that frets were no longer needed. 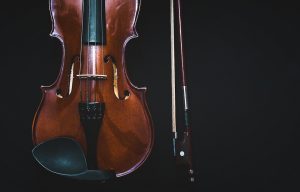 Why do guitars still have frets?

Guitars went from using gut frets, like early violins, to using metal frets. Guitarist found that there was more sustain on the note when the note was fretted as opposed to a fretless neck or the original use of gut frets.

A guitar is string is played by strumming or plucking and produces a percussive sound that has a limited length once released.

A violin is played using a bow, which can produce a continuous sound, (its own “sustain”), therefore there is no real need for frets, which would only get in the way of being able to move the fingers around the finger board.