A piano is a beautiful instrument and one that takes years of playing to get good at.

The luxury of owning a real piano is not feasible for many people as a tradition strung piano takes up a LOT of room, is incredibly heavy and requires maintenance and care to keep it in excellent condition and in tune.

The modern alternative to a piano, which is much smaller, easy to care for and a lot cheaper, is a digital piano.

But how do they pack all the craftsmanship of an upright or grand piano into a piano the size of a large keyboard and still guarantee that an expressive sound can be achieved? 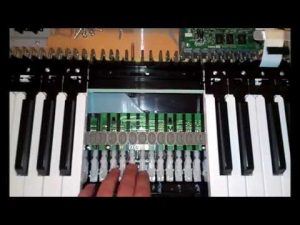 How do digital pianos work and what defines they price bracket?

A digital piano ultimately makes the sound in the same way that a keyboards would, it produces the sound which it has been programmed to produce, digitally.

A digital piano produces sound in the way that a keyboard or synthesiser would create sound. Except digital pianos have more advanced mechanisms that re-create the effect of playing a real piano.

A traditional piano products sound by the individual strings being hit by hammers that are triggered by you pressing the keys.

Do digital pianos feel like playing a real piano?

Digital pianos are far more advanced than keyboards and synthesisers, they are designed to recreate the feel and response that you have from playing a real piano.

Okay, so how is this done?

The keys on a digital piano are often weighted, the weight of pushing the keys feels like the resistance you feel when pressing a key on a real piano.

The weights also help to make the key raise more slowly after it has been pressed. (The keys on a keyboard or synth pop up immediately and can often get in the way of playing – especially when you’re used to playing a real piano.)

Digital piano keys respond like proper piano keys and take longer to raise back up. 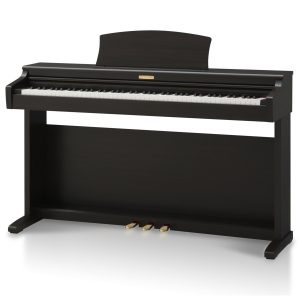 More expensive digital pianos may have the addition of hammer action keys, they are still weighted but respond even more like real piano keys when they are pressed.

This is because of the hammer action, this takes place in the inner workings of the digital piano and means that when you hit a key, this activates a lever hammer which makes the note sound (just like on a real piano.) Giving a much more realistic overall effect to the player.

As well as having weighted keys and the use of hammer action touch, the top end digital pianos also have something called progressive hammer action keys.

These keys get progressively easier to press at the right hand end of the piano – where the notes are higher and the resistance would be less.

The resistance gets greater the lower down the piano keys you go. This recreates the natural feel of a real piano, (the lower keys are harder to press because the strings are thicker.)

The higher keys on the digital piano are easier to press, this is because on a real piano, it would be easier to hit the thinner strings with the small hammers. Higher notes often have to be played quicker too!

A progressive hammer action digital piano is the closest you can get to playing a real piano.

The pressure at which you push the key also reflects on how loud the sound will be that is produced. Just like on a real piano. This enables the player of a digital piano to play more expressively.